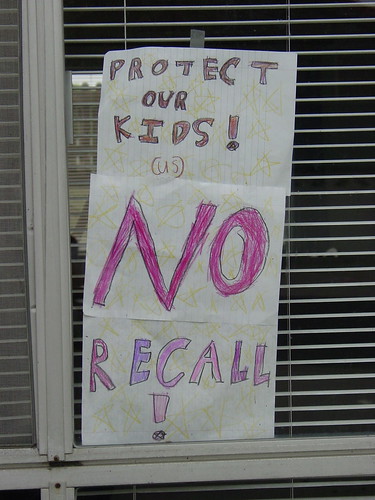 Last week a bunch of recall signs started popping up in my neighborhod. The kids wanted to know what recall meant and why the signs where there. We expained how some people didn’t like the job some of the school board members were doing and wanted to have an election to vote them out of that job. We also told them that we thought what the school board had done was the correct thing to do because they were standing up for their morals and protecting the kids. Some other no recall signs popped up saying “protect the kids no recall”. The girls saw those and liked them and decided all on their own to make their own sign and put it in our front window. They did this last night while I was at a meeting and DH was putting the boys to bed.